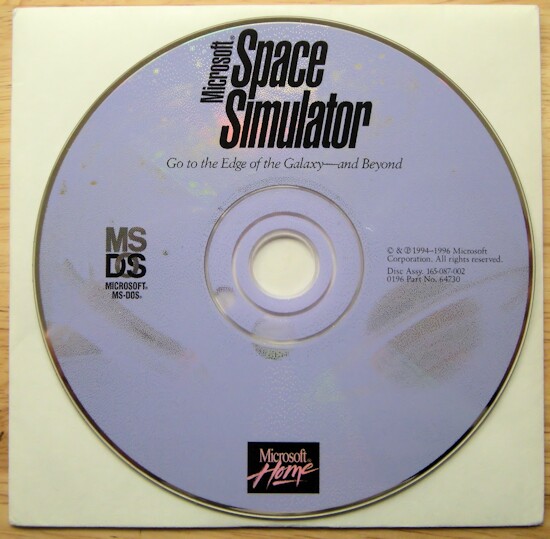 The Game
In all twelve men walked on the moon from 1969-1972. When I watch documentaries about those events now, they talk about the public apathy in the later missions. But I never knew it. It was a fine time to be a kid -- the country was space crazy. The missions were on television, with Armstrong, Conrad, Shepard and company traversing the lunar surface, looking for volcanic vents and the Genesis rock. Tang had little lunar rovers as prizes, space related toys were everywhere, and science fiction began to be regarded as a serious genre in literature.

By the time Apollo-Soyuz flew the excitement died and the former national priority of space exploration became the victim of budget cuts. Outside of NASA spaceflight rarely held the public's interest.

That is until 1994, when BAO modified its famous flight simulator with an eye towards space. The result is Microsoft Space Simulator. It is a masterwork, detailed and deeply ground in real-world physics, with enough aesthetics to please any adventure seeker.

The flight simulator heritage shows in the view arrangement and menu system. The instrument panel, which you will be displaying nearly all the time, occupies the lower third of the screen. Above it is displayed any or all of views 1, 2 and the map; any one of which may be enlarged to full-screen size. The menu, as you would expect, is a standard pull-down type and allows you to set preferences, fine-tune control device sensitivities, select automated maneuvers, choose spacecraft, explore ready-made situations and display help text. Many menu options have keyboard shortcuts.

This program is actually like two in one, sharing the same interface. The emphasis is on spacecraft simulation, but there is an observatory mode which allows you to see the sky from anywhere on Earth. You can fly to any planet or moon, including hypothetical ones around other stars, to see the sky from there too! About the sky - it's gorgeous with the Milky Way turned on, as it was digitized from either photos or artwork. The star database goes to 7th magnitude, and has distances for all of them. You can fly among their many thousands to check out alien skies. When you do travel beyond a certain distance from Sol, the actual stars and digitized Milky Way become a schematic Milky Way galaxy, with thousands of stars arranged in spiral arms, and some globular clusters surrounding the galaxy.

The stars are shown with a single pixel, the intensity representing the brightness. A number of stars, including the Sun of course, are actually spheres of the appropriate size and color, and sport spots and prominences. These stars have an attendant retinue of imaginary planets and moons to explore.

Many of the brighter deep-sky objects, such as M31, M33, the Magellanic Clouds, M8, Omega Centauri, etc. can be shown as digitized images at the appropriate size and orientation. You can zoom in for a close-up, or fly out to them in an explorer craft.

The planets and moons in our solar system have texture-mapped surfaces taken from spacecraft images, while other bodies have hypothetical surface features. Earth, with its removable clouds, is spectacular. The other planets are exquisite as well.

Now to the spacecraft. The historical craft include the Apollo Command/Service and Lunar Modules, the Space Shuttle and the Manned Maneuvering Unit. Hypothetical units include an all-terrain lander, a Zander freighter, a galactic fighter and some interstellar travelers. Also included are four space stations which can be moved anywhere in Space Simulator's universe. They are: Space Station Freedom in low Earth orbit, Ring Station One in a high orbit, a lunar orbiter and a Mars orbiter.

What makes the sim superb is that you do not need to micro-manage vehicle systems; the emphasis is on working with (or against) gravity and momentum. The simple interface is identical for all spacecraft, and the controls are the same, but handling characteristics differ due to thrust limits and vehicle mass. You also have fuel limits to take into account, but you're given ample for the job. You control the main engine thrust, and fire thrusters to adjust the ship's pitch, yaw and roll, as well as control the craft's up/down, left/right and fore/aft motion. You will be challenged.

Among the many built-in missions are a lunar landing, lunar orbit docking, and a Shuttle landing at Cape Canaveral. Your missions can be saved at any point in the timeline. My favorites missions are the Apollo series. Docking becomes familiar after awhile and landing the LEM and subsequent lift to orbit are not as terrifying as they were initially. The challenge lies in completing a full scenario from LEM/CM separation, lunar landing at Taurus Littrow, liftoff/re-docking, and possibly a trans-Earth injection burn to get back home. Yep, call me Dave Scott. At least I did not drag my LEM 15 feet on touchdown.

To help the prospective space navigator, there are many different ways to view the action: From the cockpit with a selectable head-up display, from outside the ship, through a docking port camera, or from any external body. All views can be rotated, panned and zoomed. Depending on the phase of your trip, you will select a reference for your distance/speed/attitude readouts. This can be the departure point, destination, another spacecraft/station, or any other body or location you choose.

If the pace is too slow, or if your mission plan calls for a coast of several billion miles, you can accelerate time to incredible rates; thousands of years per second. Yes, you can reach Andromeda! Or if things are moving too fast, you can slow the timeline by a thousandfold. And if Newton is getting you down with that gravity and momentum thing, shut him down with the slew function. Now you've got your own inertial dampened antigravity drive and can zip around with impunity.

Once the simulation is under way all bodies are under the influence of gravity, and if time is accelerated too much, things begin to go awry. Smaller and faster orbits are more adversely affected, so be careful; even in a stable orbit you can find yourself being flung right out of a planet's gravity well after a few orbits.

In the end this is a extremely exciting program. The manual is mainly designed to teach you the mechanics of operating the software, and does it very well with its step-by-step approach. With experimentation you will learn much about orbital mechanics. For the literal minded, Microsoft Space Simulator is a good educational toy -- It is a great way to show people the mechanics of starflight and the application of forces on objects in space. As a game, the possibility is as open-ended as your imagination. Voyage to Pluto or Alpha Centauri. Go to the Horsehead Nebula in a journey lasting millions of years. If not the Universe, at least the Local Group can be yours. 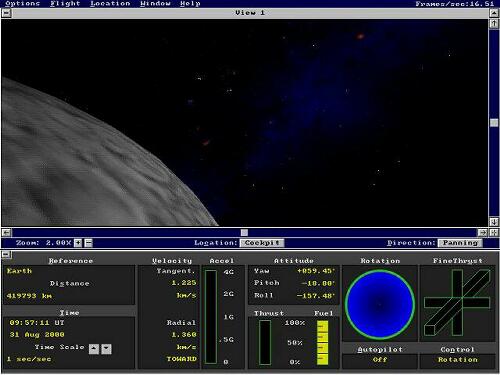 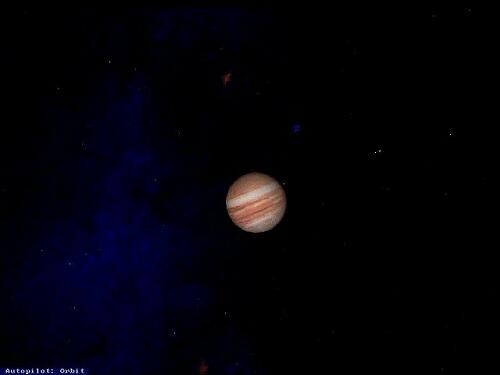 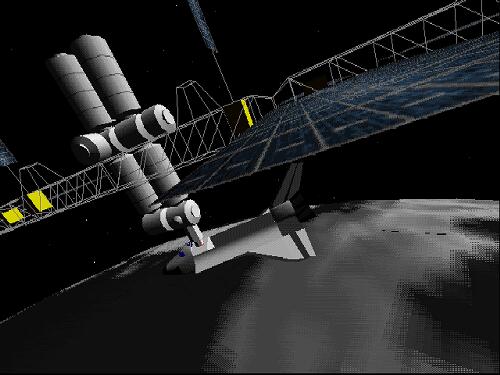