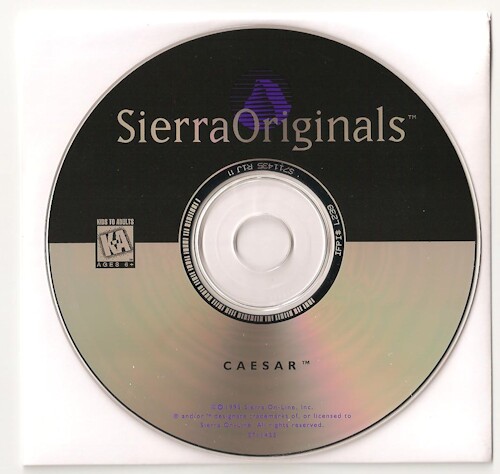 Actual Game
The Game
The popular Caesar series maintains its status by sticking to a formula that works. The games offer players a chance to become a respected leader in ancient Rome - the civilization which formed the basis for our modern western society. Just as a modern city contains a startling contrast of remarkable accomplishments and societal discrimination, so did a city of ancient Rome contain a similar variety of achievements and injustices.

When Impressions released Caesar I in 1993 it was tempting to compare it to Sim City. At first glance, the similarities between the two games are more striking than their differences, and Caesar could easily be mistaken as a sequel to the Maxis legend. Caesar, however, was a massive expansion on the theme. The game was aimed towards those who enjoyed Sim City, yet wished for more buttons to push, knobs to adjust and wires to reroute, Caesar provided all of these things and quite a bit more. Caesar is a major strategy exercise. Indeed, as one minor empire official was said to have remarked, "If you can't start an imperfect, flourishing society here, then brother, you can't start an imperfect, flourishing society."

Rome, at the time of the birth of Christ, was enjoying its success as an unchallenged, rapidly expanding empire. Opportunities to expand Roman rule to unsettled provinces were plentiful. Caesar takes place during those peaceful years, and requires the player to rule such a province. Given some limited cash, the amount of which depends on the level of difficulty selected, players must begin to establish order. The major portion of the job involves setting up that province's capital city - wherein city simulation fans will feel most at home. However, matters such as intercity trade, connections with the empire, and defense against barbarians, are all handled outside the city's protective walls. Players who successfully govern a province are rewarded with a more difficult area to supervise, along with a more restrictive budget. Waiting at the end of this line of provincial governorships is the title of "Emperor" and the presumed ability to then exploit other provincial rulers. Others may find themselves figuratively exiled to Gaul like Pontius Pilate.

Taking place in rapid-motion real-time, Caesar uses an intuitive point-and-click interface. A good thing too because there are many structures from which to select and over 40 icons are required to cover all of them. The icons are separated into four sub-menus, so as not to appear too confusing. In addition, players will also be dealing with lists of buildings, industries, barbarians, soldiers and more. Initially, this seems a burdensome amount of information through which to plow. However, once Caesar is up and running, most players will be delighted with the degree to which the small pieces come together as a well-orchestrated whole.

Within the capital city, players must establish and maintain a system of roads, protective walls and plumbing. Collected under the heading "infrastructure," these represent the city's blood and circulatory system. Roman populations were dependent on an extensive water system and were very fond of their baths. Other such vital structures include soldier barracks and prefectures, towers, wells and fountains. A very important facility, also included here in several varieties, are the public forums which act as centers for government and information. Overlying this infrastructure, the government is responsible for providing housing, industry, amenities, schools and major centers of entertainment. Without enough of these, a region of romantic Romans may soon become a roost of rowdy rioters.

The goal is not simply to flood the Romans with buildings and institutions. Quality housing and jobs are vital to success in Caesar, and this calls for some careful planning. Eight different types of factories may be constructed, depending on the economic advisor's research. These workshops require a nearby industrial center to supply raw material; as well as a market to sell their products. All of these centers also require nearby housing for workers. Unfortunately, these nearby houses are destined to become the city's slums and will fail to enjoy the same increase in value as will other housing. Disgruntled factory workers are also more prone to violence, and so extra police and religious influence should be close at hand to control this group of unhappy campers.

Adding to the city's resources are the Plebeians, or "Plebs." Not considered citizens of the empire, these unfortunates have been drafted into public service and must therefore be given proper care. The Plebeians, who around this time in history were demanding a voice in government, are responsible for such mundane tasks as construction, maintenance and fire prevention. They are also available to serve as soldiers, although their limited qualifications clearly mark them as the "Gomer Pyles" of the Roman army.

The analogy between a city of ancient Rome and one of modern times breaks down, of course, at the capital's boarders. Thirteen different races of barbarians wander the province, all of whom await the opportunity for a most unfriendly visit. Soldiers, organized into cohorts, must be given instructions for their patrol as well as how to respond to approaching barbarians. Any army which engages an enemy must also be given strategic instructions for each round of battle. Impressions indicates that players will soon be able to mount a miniature-based, fully realized battle with their forthcoming Cohort 2, an independent strategy: game which will interlock with Caesar.

Should the barbarians beat at the city's gate, a well-fed militia is vital if the city is to be protected; otherwise, buildings will quickly begin to crumble. Investing heavily in the armed forces is both an effective and popular way of strengthening the city against disaster. Drafting citizens is less costly, though far less popular with the population. In any case, the barbarian threat is one which wilt plague players throughout their career in Caesar.

Quality of leadership is rated at the forum in four categories: Peace, Culture, Prosperity and Empire. However, money speaks far more eloquently than any forum member, and rulers, through taxation, must show a profit each year. This essential ingredient for success may be the most elusive goal in Caesar. The empire demands an annual tribute which increases with each payment. Rulers may draw a salary for their efforts and then donate their savings to the city when it is needed. Aspiring leaders who are unable to pay off the empire after several years may finally be forced to donate their heads to the Roman hierarchy.

Regulating the flood of information and deep gameplay in Caesar is its thorough, 136 page instruction manual. A separate tutorial is also included which guides the beginner through all of the game's subtleties. There is also an admirable amount of on-line help in the form of text-windows which describe the function of each of the game's many icons. While Caesar is indeed a major project, all aspects of the game are clearly explained somewhere in the game's packaging.

Early on, many players found themselves playing the fiddle while Rome burned. But with time and effort it became obvious that Caesar provides that rare quality in strategy gaming - an experience whose rewards prove equal to its challenges. While the casual gamer may view the program as a meal with one too many courses, Caesar goes far beyond its Sim-City origins and provides the serious player with a real lion's feast. It is no surprise the series is still going strong two decades later. 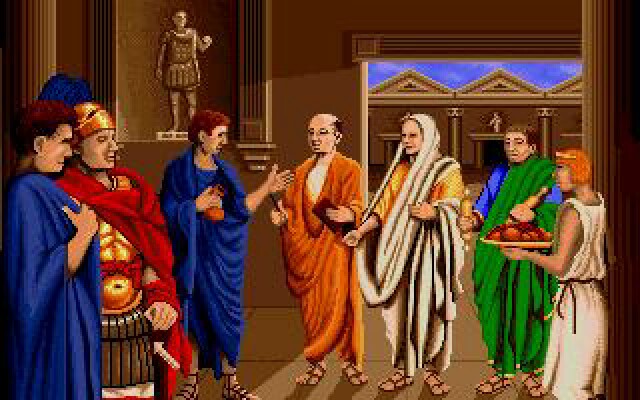 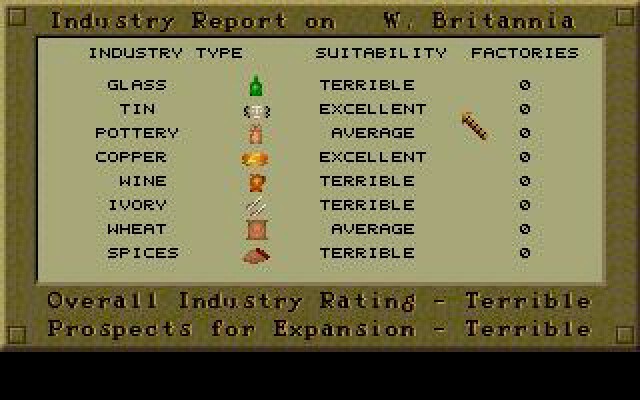